Why is my roof leaking?

During the rainy season here in the Pearland, TX and the surrounding areas, we get a lot of phone calls for roof leaks. So, I wanted to write a short article about the common things we see in our industry that cause the most problems and maybe how to identify some of these things easily on your own. First, we will talk about the most common areas for leaks and then we will identify 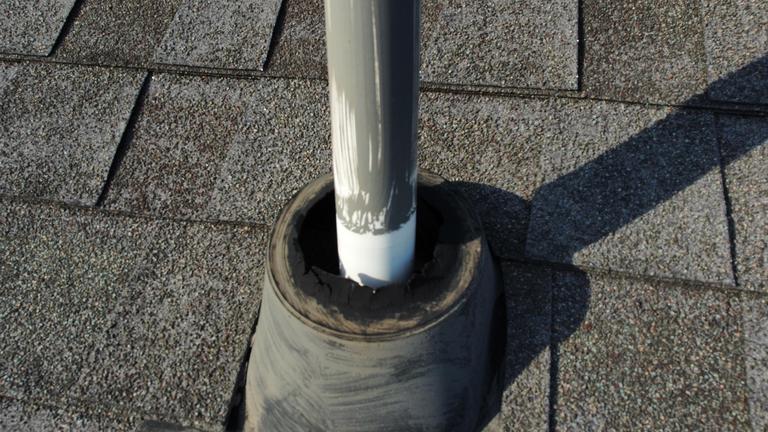 what to look for.

The most common place for a roof to leak is at a roof penetration. A roof penetration is anything that protrudes through the roofing system from the attic to the outside. These include dryer, attic, water heater, bath fan and HVAC vents as well as plumbing vents which are the PVC pipes that shoot up through your roof. Another common area for roof leaks to occur is at nail pops. While these aren’t uncommon, if your roof is aging, nail pops can be a reoccurring problem. Nail pops occur as nails back out due to expansion and contraction of the roofing system during changes in the weather and the natural vibration of your home. The last most common entry point for water is missing shingles. As just discussed, missing shingles mean exposed nail heads and those exposed nail heads can allow water to enter your home.

So… How do I know if one of these locations is the problem? We recommend that you hire a qualified roofer not only for their expertise but for your safety and not having to navigate the slippery steep slopes of your roof. Some of these things you can see from the ground if you have good visibility of your roof from the yard or a window and know what to look for. One of the ways we inspect is through drones and if you happen to own one, this could be a perfect use for it. 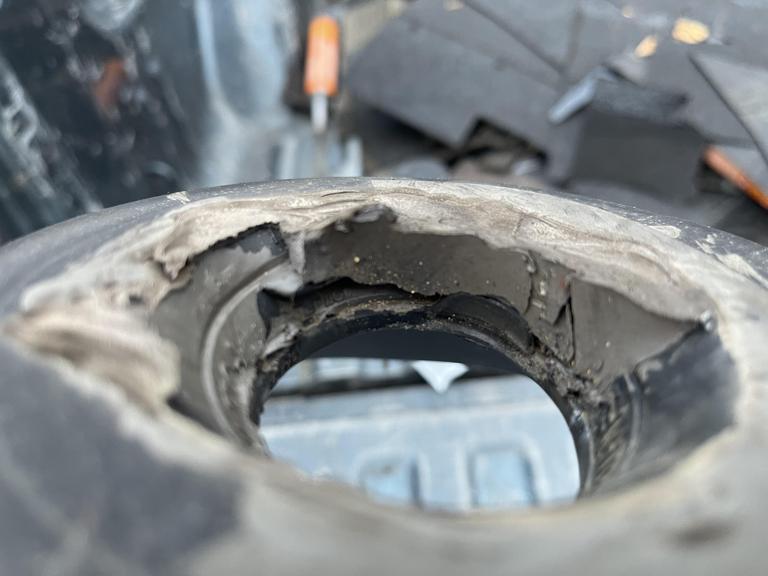 So lets get started… This first photo is of a plumbing vent with a damaged pipe boot. This boot is a plastic or metal base with a rubber boot that fits snuggly over standard plumbing vents. As you can see from this photo, the rubber portion of the boot is completely gone from around the vent, leaving a wide opening for rainwater to pour directly into the home. If you notice, the vent is also painted, leaving a clearly visible white section of pipe exposed. While these boots are painted to match your roofing system, it serves another purpose. From the ground, you can visibly see the boot has relaxed from the pipe which means the boot may not fit as snug as it used to, leaving gaps for water to enter. The second photo is an example of a pipe boot that needs to be replaced. The boot has relaxed to the point where is has created a “bowl” where water can be collected and continually leak. You can see that a massive amount of silicon was used to “seal” this pipe boot. While this can be a temporary solution, replacing the pipe boot is inexpensive and more effective. 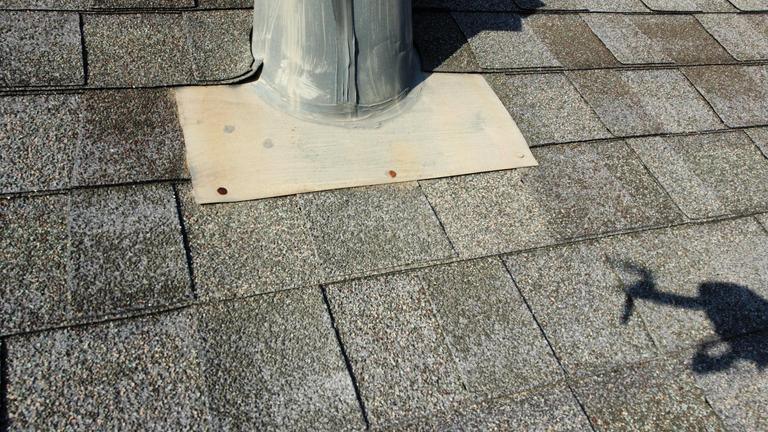 Other roof penetrations like tapered vents (the vents that kind of look like a mushroom) have common leak areas where the tapered stem meets the flat metal base. This joint can become prone to leaks and may need to be sealed or replaced. In the third photo, you can see the seam. This install is not best practice, and the middle row of shingles should have been installed over the base of the vent and a skilled installer could have covered the nails leaving them protected. There should also be space around the base of the stem to allow for inspection and reseal when necessary. This vent as well as other can be installed with the fasteners (nails) exposed (common practice) and over time the sealant that is used to cover them comes off and leaves the nail head exposed. As you can see them starting to rust in this picture. These can become easy entry points for water.

From the next photo here on the right, you can see the pipe boot flashing has started to lift, backing out the 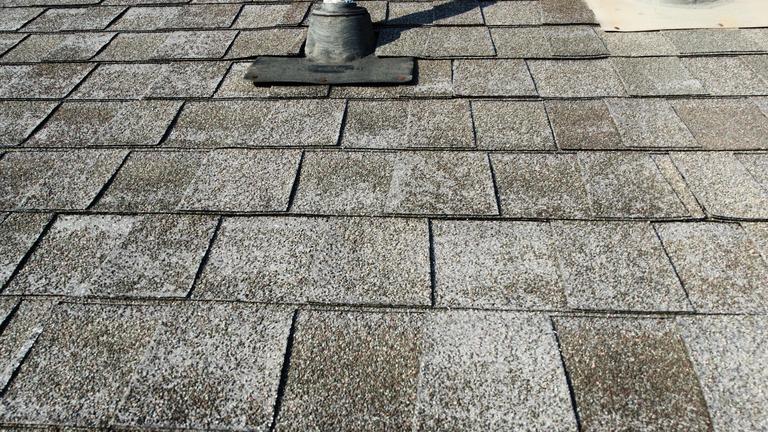 nail heads and leaving room for wind driven rain to enter the home in multiple ways. The last common leak point and sometimes the most difficult to diagnose is a nail pop. This term is used 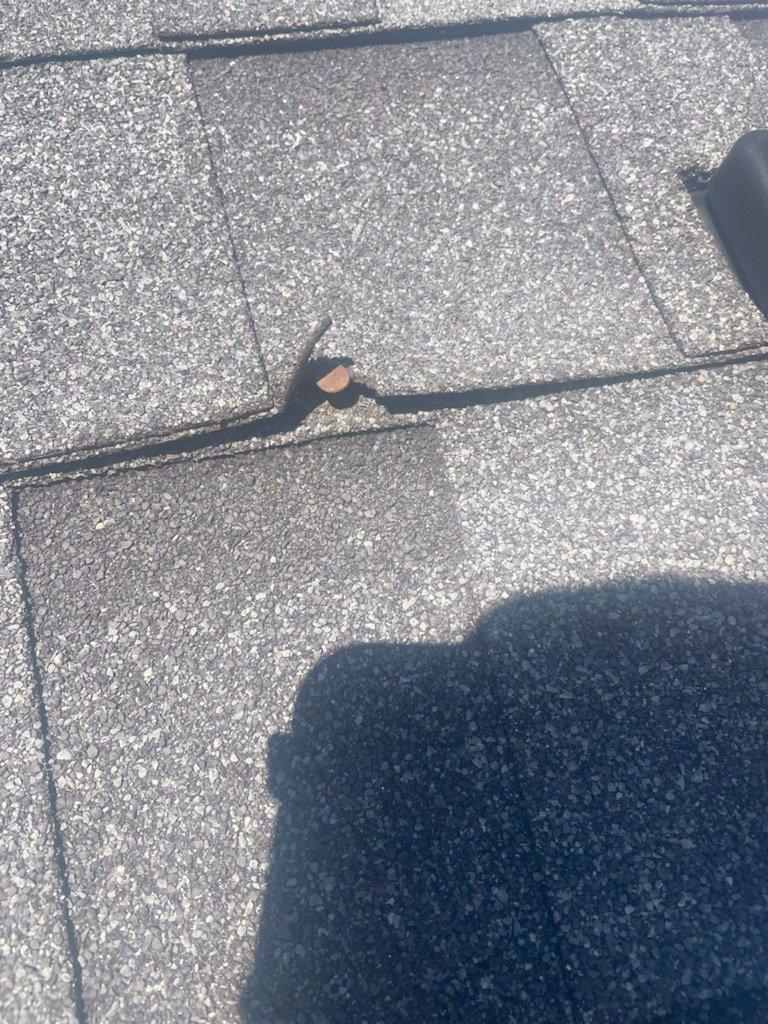 to identify several things that can occur when a nail backs out of the decking. This could mean that the nail is completely missing, leaving a whole through the shingle and the decking. It could be a nail head that had backed out due to wind forces on the flashing. Most commonly, it can refer to nails, under the shingle, that back out over time due to changes in the weather that cause the roof and the nail to expand and contract at different rates, pushing the nail out of the decking. (Photo on the left) The homes natural vibration can cause the nail to eat through the shingle above or even just lift a shingle that is no longer sealed. You can see the nail has backed out with enough force that it tore the shingle above it. It’s common to have some nail pops over time, but the frequency will increase as the roof ages and the shingles become more brittle. This one nail pop left a huge water stain in two rooms in this client’s home. The repair cost was over a thousand dollars and could have been caught with regular inspection and maintenance. We hope that this article will help you to identify potential problems before they cause damage and as always, if you have any questions, contact a qualified roofer.

Our Customer Reviews
Here's what our customers have to say about our company!
Recently I had an inspector come in and take a look at the entirety of our home as we are getting ready to sell. One of the things that was...
- Hailame Kinikini
I had them do my 90 yo parent's new roof a couple weeks ago during all the rain *lol* bless their hearts.....I took bids from three vendors, these guys came...
- Ginny Mobley
Great resources. Got the job I needed done, done quickly.
- Jamale Nagi
They arrived just a few hours after being contacted about a possible roof leak. After a thorough inspection, they identified the issue and had a solution. Their quick response saved...
- Jason Grove
Like many, struck with an immediate need for roof leak repair. I had a leak from a vent flashing that became unsecured. I began calling roofing companies mostly suggested from...
- Scott Stevenson
Thanks so much Josh for coming out to do an inspection on my roof. I greatly appreciated it & the feedback from the inspection. I really appreciated all the explanation/education...
- a mag
Read More
X
Schedule A Free Estimate